Welcome back to the Health REBELs Podcast. Today, we’re going to get into a little bit of drama. I’m going to talk to you about a Facebook fight I got into yesterday. A health coach on facebook? Dangerous game… But don’t worry, it’s not just about the drama, it’s not just about lashing out, it’s actually going to be about health. As everything here in the Health REBELs podcast is about health, because we’re on a mission to help you redefine healthy living by following the REBELs Oath. 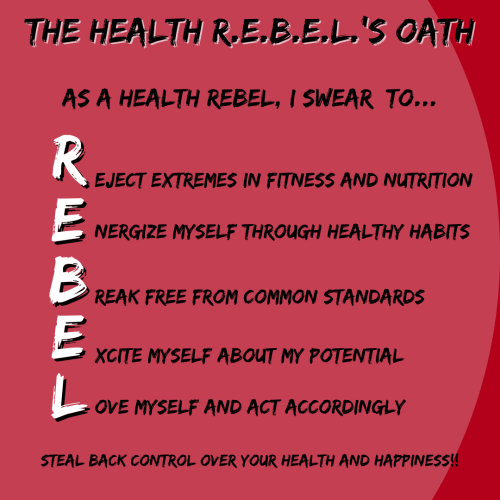 Anyway, let’s dive into today’s episode, and learn about a little Facebook fight I got into yesterday.

Ah, yes, the faithful Scroll of doom, social media. I was on Facebook yesterday. And as I was scrolling, I came across this profile. And I will be upfront and completely honest, the person that I got into this little, little tiny tify with, I respect the hell out of them. I am a big admirer of this person’s work. So I’m not going to name who it was.

In fact, I earlier this year have sent out a list of book recommendations. And this individual has a book on the list. I respect the hell out of this individual. So no ill will no disregards. But despite their best work, and they are one of the best in the industry, we still have this tendency in the fitness industry to run amok.

And what ended up happening was I saw that this individual was going to be presenting on a expert panel and having a debate next month, I believe it was listed as next month, later this year. But they were going to have a debate with another professional about what’s more effective for fat loss, resistance training, or cardio training. Right, though, damn it, right.

It’s something that all people always ask what’s better for weight loss? Should I lift weights? Or should I run? Right? It’s something that gets asked a lot. So it makes sense that this debate would occur. What occurred though, was, as this person announced, the first paragraph said that, you know, his stance that he was going to take and that the debate was occurring.

The second paragraph of his Facebook Post said, but we all know that the best path is a combination of resistance training, and cardio. And then the next best option is personal preference. And I got really upset at that second paragraph, I got really upset with that second paragraph. Because it’s true. It is absolutely true that as far as fat loss goes, the most effective workout plan is going to be a combination of resistance training and cardio, not either or, but both. And I know there’s a lot of popularity, especially in meathead culture and gym culture, just talk about cardio kills your gains, bro. But the reality is, you should have both elements in your training in your exercise plan at some point throughout the week, you should be should be having both components.

And look, if you’re not going to do both. The next best option really is whatever your personal preferences, the reality is the best workout plan in the world will not get you results. If you don’t do it, and you’re less likely to do something that you don’t enjoy. So personal preference is important.

And of course, as a REBEL, you’ve probably listened to Episode Eight The part of the REBEL oath is being excited about your potential. And I believe this is the biggest secret to ultimately your health outcomes and all of the results you’ll get in the fitness space, you have to be excited about what you do. And if you do something you don’t want to do, it’s tough to have that excitement. So personal preference is really important.

I had commented, and this is where the this is where the Tiffy started, was I had commented that the second paragraph completely invalidates the first paragraph, you know, to make a stand in the debate of what’s more effective resistance training or cardio, and then to immediately say that the reality is a combination is and then the next best option is your personal preference.

And to me, as a health coach, it’s a really pedantic conversation to have that debate It’s incredibly unnecessary to have that debate, because I’m sure that both people on that stage will agree that a combination is most effective. And if you’re not willing to do a combination, then what your personal preferences will be the next most effective. To have this debate is a waste of time. It adds more confusion to the already confusing jumbling myths and misinformation and in contradictory fitness industry that we have. We are constantly at with battle with each other contradicting each other, instead of coming to the common middle

Right, instead of focusing on how we can help people that are not currently engaged in fitness, we continue to have circle jerks and debates amongst ourselves talking about the most effective things to make people that are already effective, more effective. We’re not opening a path to wellness for other people.

And in this example, with this debate, the individual who again, I respect dearly, and I will not mention their name because I don’t want any any any potential like, seem like I’m throwing shade. But this particular individual, I know their background, they do run coalition of health care providers who lift, he was a college wrestler, I’m pretty sure he’s been lifting weights since his early teens. Lifting weights is one of this person’s personal passions, right? The person that they’re debating, partakes in a lot of road races, five K’s half marathons, marathons, things like that, right for that person that they’re debating. endurance training is a personal passion.

When these two individuals get on the stage, they’re not going to be talking about fat loss, they’re going to be validating their own personal passions.

And again, maybe this is my bias because after my knee surgery after my knee reconstruction, to me, fitness was about about reentering life and being capable of doing what I wanted to do. And that’s how I define health for people is the ability to live without feeling held back. Maybe that’s my bias. And I’m pushing that on other people too. But I really hate how in the fitness industry, we’re always trying to give performance and maximization and optimization to people that are looking for health.

People are looking for one specific thing and we’re ignoring their asks and giving them what we’re personally obsessed with. And that bothers me to no end. The reality is and what I’m trying to do with Health REBELs is create a new path to wellness that’s focused first and foremost on health, and what the individual needs to support their own biology and their own lifestyles. (If that seems like the type of coaching you would like, book a call)

I want you to support your body so that you can live your best life. And to do that, we don’t need to get into pedantic arguments about what’s maximal best, what is optimal. We don’t need to do that. We need to talk about what benefits the body and what’s reasonable for you to do with your life commitments with your level of excitement and with your preferences. We need to make the fitness industry focus on the individual.

As a health coach, I’m really trying to work on bringing this back to the individual and focusing on health, not to continue the obsession with fitness and performance. You know, on my website, it says finally, health coaching focused on health not all athletics because unfortunately and I’ve I’ve made this Miss Jake, I used to hand out when I was a personal trainer back in 2012. In Seattle, this is painful. I used to hand out flyers to clients when they started off with me, talking about the everyday athlete. It’s disgusting, looking back at it. But I was trained in the athletic performance world, and I was trying to apply what it was like to be a college strength coach to the general population and trying to convince people that they needed to train like college football players, I was an idiot. I am so sorry, to my early clients for that. But I’ve learned, and I’ve learned that the health industry should be about the health industry, it should not be about athletics.

And so I hope that you agree with me on this. And again, to this individuals credit that I was commenting on Facebook, I know his personal practice. When he deals with patients, he is very willing to compromise his personal preferences to meet his patients needs and he gets tremendous results with his patients, he does good work, he really is one of the leaders in the health space of redefining health. And I’m a little I’m a little shocked that he would spend so much time with a pedantic argument that doesn’t benefit those in the audience listening to him. But apart from that, what I really want to do is I want to as a health coach, move the conversation to be a health first focus. And I think we need to do that in the industry.

And if you agree with me, could you do me a favor? Could you help me make that health first shift by sharing this podcast with somebody, you probably know somebody that has gone to the gym over and over and over again started over and did that athletic focus, and then fell off within a couple of months, because they weren’t focusing on their own individuality, or their actual health needs. I know you know, someone in your life that has done that, because I know even in my world, I know dozens of people that won’t take my advice, even though it’s there for them. And they keep falling into the cycle that the fitness industry hits them with their own obsessions. If you know someone in that boat, please share this podcast with them so that we can continue to share that message of a health first approach to health and wellness. And I appreciate it. It helps the podcast grow it helps share the message and it helps, hopefully, hopefully, helps contribute to the health of your loved ones as well. So that’s, that’s what I’m gonna leave you with today. Go share the podcast with someone you think it will help. And until I see you again for another episode of the Health REBELs podcast.

You know what to do. Keep the oath I hope that episode helped give you some steps you can take to break free from common standards so that you can live a happier, healthier life. I’d love to continue to support you on that path to redefining healthy living. So I want to invite you to join my free Facebook group, the Health REBELs community. There we post daily content to redefine what healthy living means by following the holistic wheel and the REBEL of you will also get community support with like minded Health REBELs. If you’re not already a member, search for the Health REBELs community on Facebook or go to facebook.com/groups/health REBELs. I look forward to seeing you in there REBEL